10 Features to Look for in a Dash Cam

10 Features to Look for in a Dash Cam

Dash cameras have grown massively in popularity in recent years as the technology continues to improve and drivers are increasingly aware of the protections they bring. However, the dash cams on the market today offer a bewildering array of features, and choosing the right equipment for your specific needs may not be straightforward. Let's explore ten of the main features to look for in a dash cam and get an understanding of which are essential for you.

Loop Recording
Loop recording is increasingly a standard feature on dash cams, but some handle it better than others. The purpose of loop recording is to allow constant recording of high-quality footage onto a memory card of limited size. Without loop recording, the memory card would quickly become full and could miss a crucial incident. By overwriting older footage on a rolling basis, the camera can keep running indefinitely, even when recording in 4K. Important footage can be automatically or manually protected so that it won't be overwritten, allowing you to keep recording while preserving video evidence of earlier incidents. 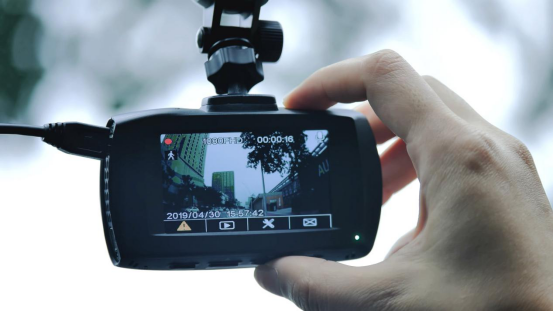 With loop recording there's no need to worry about running out of storage space
The specific way that loop recording is handled is unique to each dash cam, but most employ a system of saving a series of short files, each around 2 or 3 minutes in length. Done badly, this can result in footage that jumps and skips across the joins and sometimes even leads to a few seconds of missed footage. Should an incident take place across this join it's important the footage is smooth and complete.
Nighttime Recording and HDR 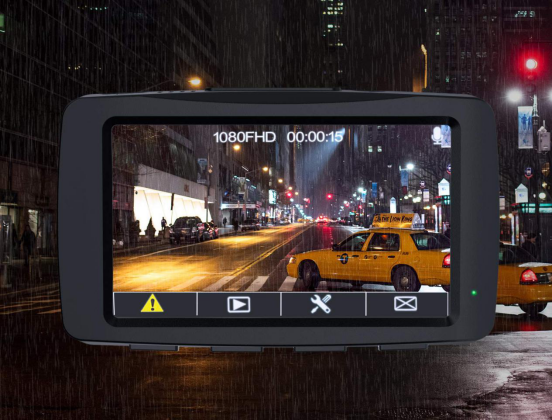 Accidents are more common after the sun goes down

Given that the majority of traffic accidents happen at night and in low light, a dash cam that can't record effectively in such conditions isn't really much use. Higher quality dash cams usually offer some kind of High Dynamic Range (HDR) technology that can produce clear images in very low light. Such technology also does a good job at handling the glare from street lamps or on-coming headlights, as well as direct sunlight on a bright day. Cheaper dash cams will easily become blinded in such situations and could leave you with no useful footage in the event of an accident.

A good dash cam will give just as much clarity at night as during the day
Wide Field of View with High-Definition
A dash cam is different from a normal video camera in that it isn't trying to focus in on any object in particular, rather it is trying to capture as much information as possible. Using a regular lens with a relatively narrow field of view in a dash cam isn't great because it has basically no peripheral vision, meaning important details or context could be missed in the event of an accident. For example, side collisions could be missed entirely, even with a front and rear dual-channel setup. Put simply, the wider the field of view the more action you will record, and the more likely it is that you'll capture the evidence you need. 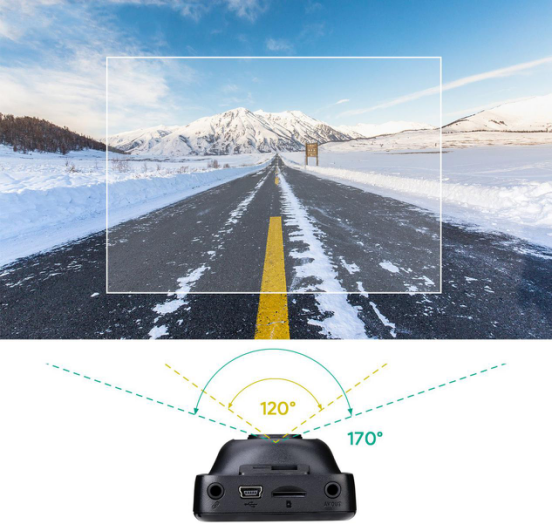 A wide angle lens captures so much more
It should be noted that a narrow field of view does have the advantage of focusing all the detail onto what's going on directly in front of the vehicle, but with the high resolutions of modern dash cams this isn't really an issue anymore. Even when using very wide fields of view, high-definition ensures license plates are still readable in recorded footage. A field of view of around 170 degrees provides a view wide enough to capture basically everything the driver can see, but without distorting the image too much and creating a disorientating fish-eye effect. In terms of definition, nowadays anything less than 720p can be considered insufficient due to the lack of detail. 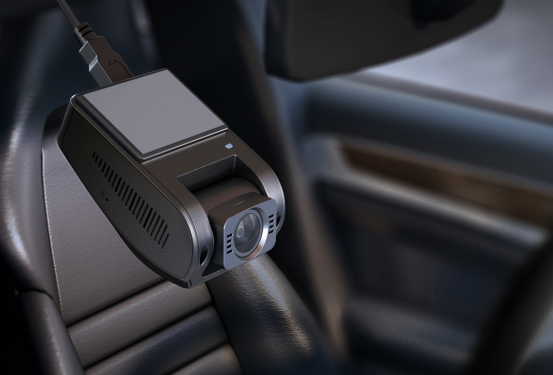 The AUKEY DR02J supports up to 4K resolution
Practical Display
The display on a dash cam may not be critical to how it records, but a larger screen with higher resolution can make the device more convenient to use on a daily basis. If the display isn't clear, it's difficult to properly review footage you've recorded or adjust settings. That said, the larger the screen the larger the dash cam, so there will always be some degree of a trade-off between screen size and how compact the device is. 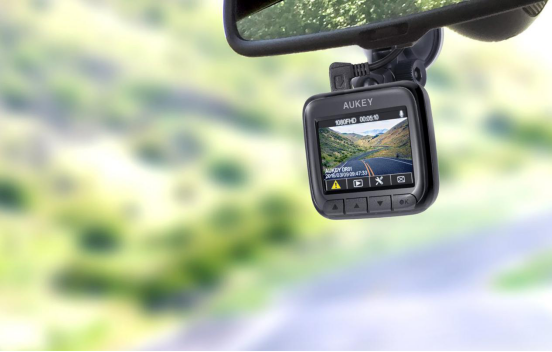 A compact device means a compact screen
Some relatively expensive dash cams have touchscreen displays, which have the advantage of allowing for a full-width display without the need for buttons. Touchscreens have a modern feel with smart & versatile operation, but some people still prefer the tactility and simplicity of physical buttons. If you do go for a touchscreen, a bigger screen is definitely better to use.

Gravity Sensor
A G-sensor is one of the more advanced features you can find in a dash cam. The technology is able to register sudden G-force events like sharp braking, violent turns, and collisions. When such an event is detected, that section of footage is automatically protected against overwriting. For smaller incidents, this feature is convenient, saving you from manually locking the footage, and in the chaos of a serious event, it's crucial to ensuring the footage is saved. Having a G-sensor provides peace of mind and gives "black box" functionality to the dash cam. 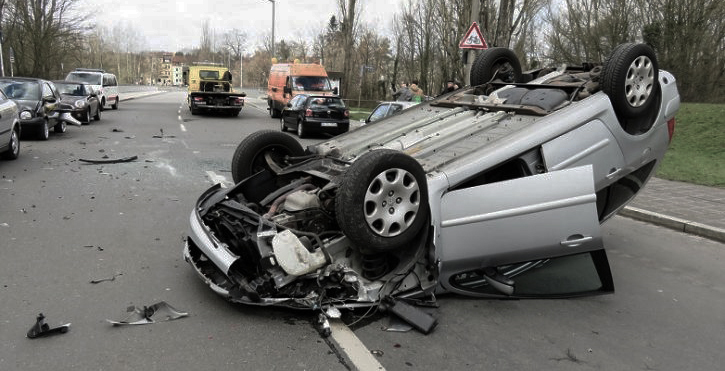 In the event of a serious accident it may not always be possible to manually save footage
Parking Mode
A lot of the potential misfortune that can befall your vehicle happens when it's parked and unattended. With this in mind, many dash cams include a feature commonly known as "parking mode" (in AUKEY dash cams it is found under Motion Detection). Parking modes come in many different guises and it's a pretty complex topic, so much so that we wrote a dedicated article on the subject. 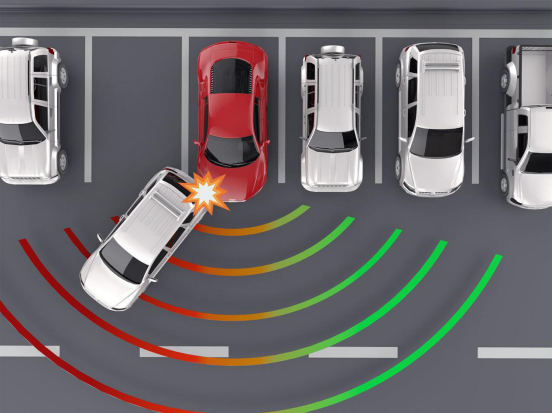 The sensor triggers the camera when motion is detected
As a quick summary, most parking modes use motion sensing to try to detect whenever something notable happens while the engine is off (for example if the car is bumped or somebody approaches it), which then triggers the camera to record a short clip. The complicating factor is that the dash cam needs to be powered while the engine is off, and so the standard practice of connecting it to the cigarette lighter won't do. Instead, the dash cam needs to come with a battery (not ideal as it will only last for a limited period of time), or be hardwired to the vehicle's electrics, which actually isn't as complicated as it sounds if you use a hardwiring kit that plugs into your vehicle's OBD-II port. Either way, an intelligent parking mode significantly improves the protection a dash cam provides and is a feature worth looking for.

Adding a rear camera doubles the amount of footage recorded
Many users consider a simple front-facing single-channel dash cam enough; but for those particularly concerned about insurance claims, a rear-facing view is an essential addition. Rear-end collisions are the most common kind of traffic accident and make up the highest proportion of car insurance claims, so having only a front-facing view is a substantial limitation. A dual-channel front and rear setup combined with a wide field of view means blind spots are greatly reduced and almost everything that happens around your vehicle will be captured. 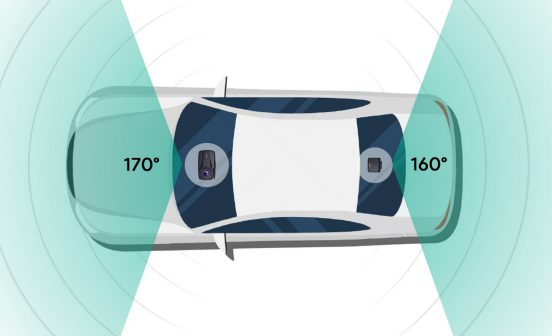 The dual-channel view provided by the AUKEY DR03
GPS
GPS is usually associated with navigation, but in dash cams GPS trackers are mainly used to add speed and location data to footage. The speed data is often more accurate than the speedometer on the car, and can be crucial in supporting your case in the event of an accident. GPS coordinates can also help pinpoint the exact location of an incident, particularly one that took place on rural or unfamiliar roads. 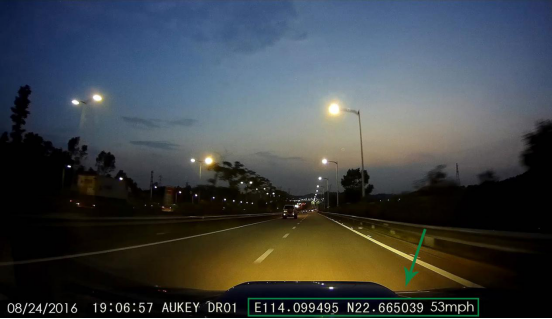 Location and speed data as recorded by the AUKEY GM-32 GPS Antenna
Solid Mounting
For dash cams, it's hard to overstate the importance of solid mounting. Driving isn't always a smooth business, and in the event of an accident your dash cam won't be much good if it becomes detached from the windscreen and ends up giving you a close-up of your dashboard. Rubber suction cups may have the benefit of convenience and easy installation but aren't particular secure. It may seem like a minor detail, but the quality of the suction cups a manufacturer provides can make a significant difference to the experience the end user has. There's nothing more frustrating than a dash cam that continually falls down every time the weather gets colder. A proper adhesive mounting, like the 3M pads included with AUKEY's dash cams, provides much more robust fixing.

Suction cup on the left, adhesive pad on the right
Discreet Design
Not everyone wants to have bulky surveillance equipment placed conspicuously on their dashboard. This isn't just because it clutters up the interior of the car, but also because it can be unnerving or intimidating for passers-by who find themselves suddenly staring into the lens of a camera. For this reason, many dash cam buyers seek out equipment which is discreet and hard to spot. This can be achieved either by positioning the device where it will be more concealed and less obvious, or by choosing a dedicated low-profile "stealth" design. It's also worth checking if any flashing recording light can be turned off. Some users prefer to have it on as a deterrent, but most AUKEY dash cams also give the option to disable it if you prefer.

The high-mounted, wedge-shaped AUKEY DR02 is designed to be as discreet as possible
To learn more about dash cams, check out this in-depth look at parking mode, or browse the current range of AUKEY dash cams.